The Mystical 10x Developer. A Creature As Elusive As Bigfoot. 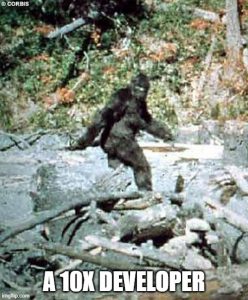 Search “10x developer” on HackerNews, and you’ll find many heated online debates on the topic. Expect nuggets of wisdom such as “Being a “real” 10X programmer is like being a savant. It’s about being F****** SMART.”

We’re not going to weigh in on the debate of the 10x developer. At least not in relation to individual talent. Instead, we want to look at it from the perspective of development tools.

Remember the story of the 30-story hotel built in China in just 15 days? If not, we recommend watching the video first before continuing to read.

Here are three lessons we can learn from the video regarding software engineering.

What’s the overall conclusion? Process improvements, be it through better tools, such as low-code tools, management techniques, or even organization culture, can trump individual skill and help increase software engineering productivity. Software engineering is best managed as an engineering process. And outcomes are driven by making this process as efficient as possible.

The topics that we cover are: