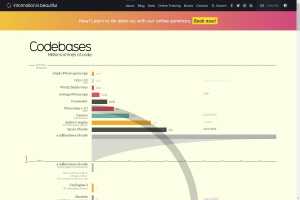 There’s a debate on how many lines of (production-ready) code a developer can write a day. Or whether, indeed, this metric is still useful. But let’s engage in a thought experiment. Let’s assume that the average lies somewhere between 20 to 40 lines of production code. That’s already double to four times as much as “The Mythical Man Month”, a book on software engineering, quoted.

Based on these statistics, a team of three developers would spend anything from six months to one year to create an Windows application. Not an unrealistic time frame for a software development project. Yet more time than a business might have to respond to a market trend.

In addition, depending on the choice of programming language and approach, there is more than one way to achieve an outcome using code. Different developers will come up with different approaches. Good code requires few lines, runs smoothly, is easily readable and maintainable. As Bill Gates said, less is more when it comes to writing software:

First, they relieve software developers of the mundane work of having to write code for every form, field, and report. And second, they increase reliability and security. By using a standard platform with standard components, developers can speed up the development process by using what has been tried and tested by the platform provider. Think of an aPaaS in the same way that car manufacturers build multiple models and marques on shared automobile platforms: a shared foundation instils best practices and standards into every software that is created using the platform. But it still allows developers to create unique solutions with unique functionality.

At Five, we take a hybrid approach to low code. True to the spirit of “low code”, we mix no-code and full-code approaches. On the one hand, developers can inject custom code in multiple ways and languages. This makes applications created on top of Five fully customizable. On the other, Five offers no-code components that can be quickly used and re-used in your application development.

Low-code software engineering does not eliminate custom code, but reduces it. The result: Fewer lines of custom code. Faster project completion. Fewer vulnerabilities. And more reliable software that is easier to maintain.