The Demand For Full-Stack Developers Is Rising

More and more companies want to hire full-stack developers because of their fluency in multiple general-purpose programming languages and frameworks. A report done by the US Bureau of Labor Statistics states that the number of full-stack developer jobs will rise from 135,000 to more than 850,000 by the year 2024. And the industry is projected to see a further 22 percent employment growth until 2029.

But learning all of the top programming languages involved in full-stack development is a challenge. A blog post from Columbia University’s School of Engineering lists no less than 11 useful skills and languages to learn for full-stack developers, from CSS to Python, SQL, HTML, and web architecture. Planning and designing the technical, functional, and visual components of web pages, mobile apps, or web applications requires proficiency in multiple, different technologies. 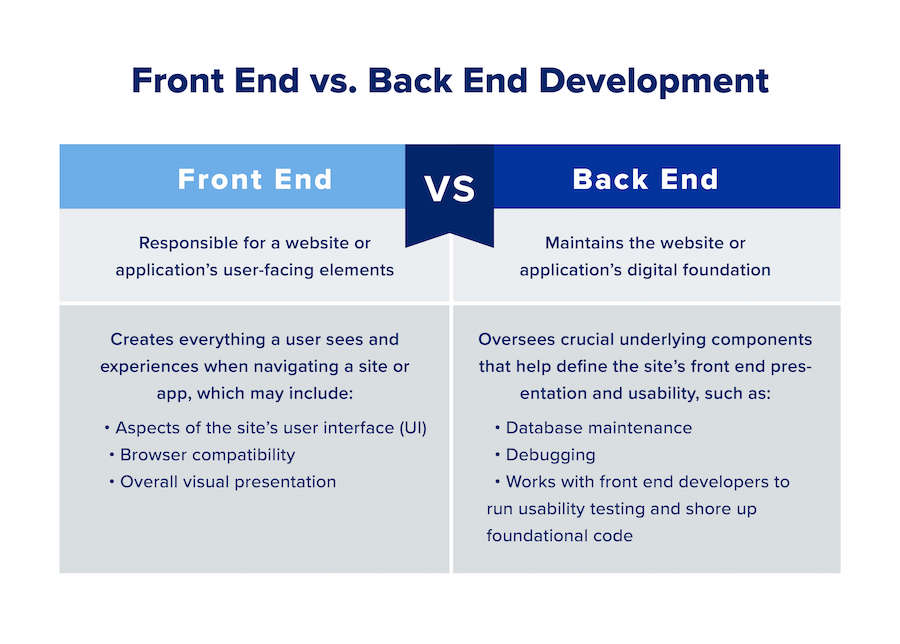 Originally created by and published on https://bootcamp.cvn.columbia.edu/blog/what-is-a-full-stack-developer/

But not everybody has the time, nor the patience to go through coding bootcamps in all these different programming languages. Plus, the learning curve for picking up a new language can be quite steep. Whilst easy-to-read and -write languages like SQL or Python can be rewarding and fun to learn, mastering more complex languages, such as JavaScript or C#, can be a years-long journey.

What Are The Best Programming Languages To Learn To Land A Job As A Full-Stack Developer?

A full-stack developer is in charge of the front-end and back-end development of web pages or web apps. In order to succeed in this role, developers need to have some understanding, or even better some degree of fluency, in things such as object-oriented programming languages and web technologies.

It’s best to start by learning general-purpose programming languages that are widely used and have big support communities, such as JavaScript, HTML, CSS, and SQL. Let’s look at each one of them one by one:

Of course, the list does not stop here. Python developers, for example, have been in high demand for several years now, and having a good understanding of Python (or other functional programming languages) can boost your chances of landing a full-stack developer job.

First up, I am not a software developer. I studied finance and have spent most of my career working at software companies, but not in software development. I dabbled in software development and would now consider myself a fully-accomplished, self-taught Jack of all trades, master of none! However, I do love reading (and writing, obviously) about technologies, software engineering, and programming languages.

My personal software developer journey started on popular coding and data sciences websites, such as W3Schools, Codecademy, and Kaggle. I started learning JavaScript, Python, and SQL and have developed a basic understanding of each one of these languages. I can now read simple code, and (with the help of Google) write very basic code, but I certainly do not claim to be, nor do I consider myself a full-stack developer.

Nevertheless, there are a number of lessons that I have learned from my journey into software development:

Before we take a closer look at low-code, let me clarify one thing: low-code is not a programming language. So my title is somewhat misleading. I would consider low-code to be more of an approach to software development: one that enables developers to achieve business outcomes faster compared to a full-code approach.

Starting your developer journey with a low-code tool can be a fast track to a career in software development. Here are five reasons why:

What’s The Best Way To Get Started?

My tip: sign up for free accounts with multiple low-code solutions and build commonly used business applications, such as CRM, membership, or inventory management systems.

If free accounts are time-limited, document what you have developed in PowerPoint. Or, better, record a video of you demonstrating the solution. In your video, explain how you’ve built your solution, and keep videos within 5 minutes. Focus on the most challenging parts of the development process and explain what you’ve learned by using a particular low-code solution. Do not explain what a custom CRM or inventory management system is.

Remember: you want to be a developer, not an end-user of the system you’ve built. Focus on the development process, and not on the solution. Last, put the videos on your resume (a YouTube link will do), ideally right at the top.

Of course, I am biased, but if you’d like to give this a try, why not start with Five? Five lets you build & deploy online database applications, primarily for business purposes.

In software development, there are always multiple ways of achieving the same outcome. The same is true for a career in software development. Both paths mentioned above are viable paths to becoming a full-stack developer: if you are absolutely certain that software development is for you, we would encourage you to jump right into the nuts and bolts of software engineering and start by learning programming languages from scratch. Alternatively, if you would like to see progress quickly and take a more gradual approach, you can experiment with low-code to see if application development is for you. And then you can build your career as a full-stack developer step-by-step.

Whatever path you choose: good luck and happy coding!