Low-Code: the most disruptive trend of 2021, according to Forbes. Other articles celebrate low-code as a technology that transforms how, and by whom, software is built and deployed. Some no-code and low-code vendors go so far as to claim that “you will never go back to coding again” after using their no-code platform, or that by 2023, anyone can build an application.

To answer these questions, let’s dive deeper into the differences between low-code and traditional development.

What Is Traditional Development?

Let’s zoom in on the word application. The final product that results from a traditional software development process, an application usually has several application layers: 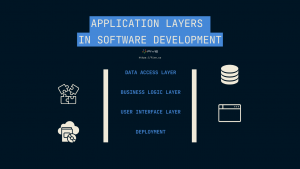 A team of front-end and back-end developers (or a single full-stack developer) is responsible for developing each layer.

The back-end developers deal with the server-side, i.e. the application’s database and its business logic. Back-end developers are generally proficient in database design (SQL or NoSQL), and object-oriented languages such as Ruby, C#, or Python.

The tools required in full-stack web application development are:

Overall, traditional development is complex: no wonder that software engineering isn’t for everyone. To succeed as a software developer, whether front-end, back-end, or full-stack, you have to have excellent problem-solving skills, the ability to think logically, and an almost insatiable thirst for knowledge to stay up-to-date with the latest and greatest technologies, tools, and frameworks.

Next up, let’s explore how low-code changes traditional development.

How Does Low-Code Change Traditional Development?

First, let’s be clear on the fact that no-code and low-code development are not the same. Unlike no-code tools, low-code tools do not eliminate code.

“Opinionated software is built and designed in such a way that it makes it easy to do things in a certain way. It favors certain design patterns more than others. In the process, it makes it difficult to deviate from the style of software development for which it was developed.”

Low-code tools prescribe how to build applications and make choices on the developers’ behalf. Let’s look at each layer one by one: 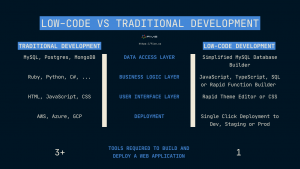 Encoding business rules into business logic is one of the most difficult tasks of application development. Oftentimes, business logic requires workflows and “if-then” logic.

Different low-code tools give developers different ways of writing business logic. Typically, this is where the distinction between no-code and low-code tools is the most obvious.

In no-code tools, business logic is created visually in a What-You-See-Is-What-You-Get interface (WYSIWYG).

In low-code tools, business logic can be created visually, but can also be written in full code. In Five, for example, software developers can write functions or processes using JavaScript, and TypeScript. Or they can be created using building blocks.

The advantage of full-code is also most obvious in this layer. The approval process above, for example, could be written in just a few lines of code. Creating a three-step approval process visually, however, involves a lot of clicks and linkages, which could easily obscure the business logic behind a web of no-code abstractions. 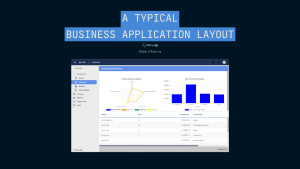 Inside Five, developers are provided with a pre-defined, responsive application layout. Instead of creating a user interface from scratch, developers only need to theme the application. And they can do so in point-and-click. Or they can go down to the level of raw code, and adjust the CSS. The advantage of this approach is that business applications have a consistent, clean UI that requires very little input from the developer. Even back-end developers can very quickly build and deploy applications from inside Five.

Deploying a web application on AWS, Azure or GCP can be a daunting experience. AWS alone offers over 200 services to developers. Figuring out the AWS Management Console is a pretty tough nut to crack.

Low-code tools make deployment easy: almost every low-code solution offers single-click deployment to the cloud. But there are important differences.

Low-code vs. traditional development: what are the differences?

First, let’s highlight the similarities. Both development approaches are designed for use by experienced software developers.

Low-code, on the other hand, is a more opinionated approach to application development. Low-code tools simplify the more complex tasks of building and launching applications and are typically best suited for a particular type of application. The abstractions provided by a low-code tool enable front-end or back-end developers to launch full-stack applications onto the cloud, even without having a background in every technology required to do so.